Farming on the Front Foot Update 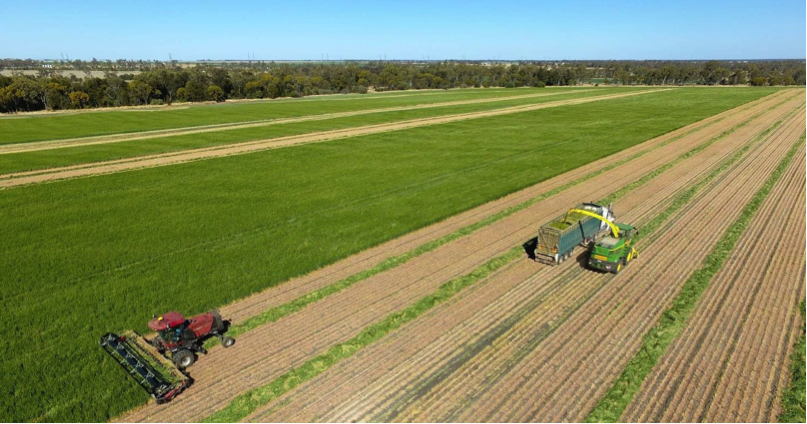 Winter rainfall in most Queensland cropping regions was below average

Seasonal conditions in the southern cropping regions were hotter and drier than average and reduced soil moisture to below average levels.

According to the Bureau of Meteorology’s three-month rainfall outlook for September to November issued on 30 August 2019, spring rainfall is likely to be very much below average in most cropping regions.

The Darling Downs suffered through a season with very little in crop rain forcing any crops to draw on what remained of stored moisture. Many farmers made the decision to green chop early Barley given that the seed would be light and of poor quality. It was an attractive alternative for many farmers this year with prices varying from $110T – $130 Per Tonne. The remaining crops of wheat and barley are now being harvested, with grain prices pushing above $400 Per Tonne.

A selection of wheat and barley crops with a reasonable body of straw are then also being baled for hay. This is also achieving a price around the $350 Per Tonne. Careful consideration for a lot of growers was given to baling the straw particularly those practising controlled traffic and zero till for many years. It equates to approximately $35 Per Tonne of organic matter being removed from the paddock that needs to be replaced at some point for future crops.

Note: Yields are based on area planted. Area based on planted crop that is harvested, fed off or failed.

Carrick Aland’s CAConnect team can help review your management figures and see what’s going to work for you given the fall in summer planting area and increased input costs for cattle. We always remind primary producers to be reviewing where you want to direct your operations and we have the ability to model which commodity line may produce the best result for your situation.

Given the tough economic outlook for summer, you need to be looking at your cash needs now, identifying potential hurdles, and considering assistance such as the Farm Household Allowance, QRIDA subsidies and loans and talking to rural financial counsellors for extra direction. Our team at CAConnect are on hand to review your cash flow and the pinch points. Call us on 07 4669 9800 to plan the summer season now.

Carrick Aland and their team of dedicated staff have been assisting us, and our business, with professional accounting services for over 20 years.  I have always found them easy to work with and they have always responded very quickly to my enquiries.
END_OF_DOCUMENT_TOKEN_TO_BE_REPLACED

As the owners of a new small business, we very much appreciate Xero for ease of use in processing business transactions.  It has been the right choice for our accounting needs and has saved us much time and effort while we are busy with day to day running of a small cafe & catering business.
END_OF_DOCUMENT_TOKEN_TO_BE_REPLACED

Succession is always complicated, especially the non-rural versus the rural however Wayne Turner was able to process this and bring valuable options to the table. Wayne kept us on track by discussing options broadly and then following up to guide us through the finer details. It was a lengthy process but we needed that time to consider all aspects properly and wholly.
END_OF_DOCUMENT_TOKEN_TO_BE_REPLACED