Why Aussie pork profits are plummeting 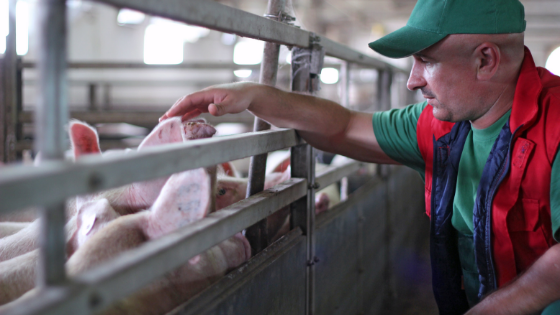 This article services as a reminder for our producers to keep a careful eye on gross margins and overheads as things are going to get tougher before they get better.

Pig producers in New South Wales are battling a combination of factors that have seen as many as 80% of them selling all their pigs and leaving the industry.

One producer said he was spending $8,000 every week to feed his pigs.

Recent figures from the Federal Department of Agriculture showed pork imports fell 13 % between 2017 and 2018. Others speculate an oversupply of pig producers has forced the downward trend in prices for Australian producers.

It wasn’t long ago that the sales attracted large numbers of buyers and sellers at saleyards, but those numbers have been steadily sliding with most saleyards now not dealing with pigs.

“Six months ago we were getting 600 pigs at every sale here in Forbes; now we’re lucky to get 200,” stock agent Murray Reid said. “We’ve lost probably 80% of producers in NSW and Victoria recently, and sourcing local pork in the butchers is only going to get harder.”

In recent weeks, producers at the Forbes saleyards have been receiving $3.80 a kilogram for pork and around $4.00 a kilogram for bacon whereas, in the past, they got up to $7 or $8/kg for pork.

Now the farmers aren’t making enough to even cover their costs.

For the small group of pig producers who attended the pig sales in Forbes, there was general frustration at what they believe was a lack of promotion of Australian pork, however the real problem is continually having to deal with imported pig meat which stymies Australian pork prices.

There is also a perception that it is too difficult for consumers to work out whether the pork product they are buying is Australian or has been imported.

Countries like Denmark, the US and Canada have subsidies for their farmers — meaning they can bring pork products into Australia for cheaper than it costs Australian producers to bring their pigs to the saleyards.

Despite the criticism from farmers, the organisation responsible for promoting Australian pork — Australian Pork Limited (APL) — is adamant it is doing what it can to encourage people to buy local.

“We are investing the maximum $5.5 million a year into promoting pork and as a result we’ve seen the consumption of pork grow faster than other sources of protein,” APL’s General Manager of marketing Peter Haydon said. “We’re very focussed on promoting into the cities where consumers are, not into the country where the farmers are.”

APL said it was aware of the concerns from pig producers, particularly packaged bacon in supermarkets that are imported from the US and Canada.

“The reason a lot of what is for sale is not Australian is because of Australia’s high cost for energy, labour and grain, which makes local pork more expensive than imported products,” Mr Haydon said. “Consumers need to be prepared to pay more to buy locally grown pork.”

APL has started a country of origin labelling trial at one supermarket in an attempt to see if it will encourage more consumers to buy Australian pork products.

Where to for QLD pork producers?

At Carrick Aland Accountants we’re reminding our producers to keep a careful eye on gross margins and overheads as things are going to get tougher before they get better.

Ensure that your customers are also paying you on time, as the entire supply chain is feeling the effects of the tight pricing and it only takes one weak link the supply chain for things to collapse.

Unfortunately, there is very little in the way of government assistance, but Carrick Aland can assist with detailed budgeting tools to check your margins and performance. Call us in Dalby, Toowoomba or Chinchilla on 07 4669 9800 or read more here.

Carrick Aland and their team of dedicated staff have been assisting us, and our business, with professional accounting services for over 20 years.  I have always found them easy to work with and they have always responded very quickly to my enquiries.
END_OF_DOCUMENT_TOKEN_TO_BE_REPLACED

As the owners of a new small business, we very much appreciate Xero for ease of use in processing business transactions.  It has been the right choice for our accounting needs and has saved us much time and effort while we are busy with day to day running of a small cafe & catering business.
END_OF_DOCUMENT_TOKEN_TO_BE_REPLACED

Succession is always complicated, especially the non-rural versus the rural however Wayne Turner was able to process this and bring valuable options to the table. Wayne kept us on track by discussing options broadly and then following up to guide us through the finer details. It was a lengthy process but we needed that time to consider all aspects properly and wholly.
END_OF_DOCUMENT_TOKEN_TO_BE_REPLACED